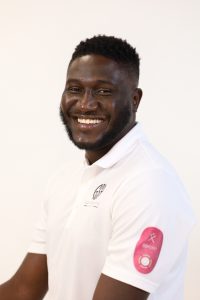 Pa Saloum Gai is the founder and president of Gai Sports Agency LLC headquartered out of Raleigh, North Carolina. With over 10 years of playing and coaching soccer, Pa is a premier multi-sports agent as an intermediary FIFA- and MLS-certified agent and advisor. Having built his own sports agency from the ground up, Pa has gained a vast understanding and in-depth knowledge of sports business development, recruitment, fundraising, marketing, networking, training, leadership, negotiating contracts and sponsorship agreements.

Prior to forming Gai Sports Agency LLC, Pa was a multi-sports athlete in high school who represented his school in varsity soccer and basketball. His immense love of soccer started early in his childhood growing up across from the Gambia National Stadium.  This eventually led to his focus on soccer which included playing three years of college soccer at North Carolina Wesleyan College (2006 – 2009). The team won two conference championships (2007 & 2008) and reached the NCAA III tournaments for three consecutive years (2006 – 2008) including two appearances in round 16 (2006 & 2007). During his tenure in college, Pa worked to cultivate relationships with athletic directors, personnel directors, coaches and scouts for college and professional teams. Through his dedication, Pa volunteered as an assistant coach for the men’s soccer team at North Carolina Wesleyan College and helped guide his former teammates win the conference championship once more. Through his keen eye and tactical prowess, Pa was able to build a stellar reputation for integrity, tenacity and expertise as well as advocating on behalf of the players on and off the field.  He continued to hone his coaching and scouting skills by pursuing a head coaching job at Rocky Mount Prep for their high school girls’ soccer team.   He also served as head soccer coach at Camp Equinux in Pennsylvania (Summer 2008 & 2009) sharing his love of the game coaching boys aged 9–16 years.  Being a proponent of sports and fitness, Pa also worked as a coach to Minnesota’s Tonka United U-15 girls’ team for two consecutive years traveling and establishing bonds with the team, as well as their families.

With the players and coaches he’s interacted with, Pa has become widely recognized and respected as an expert on soccer tactics and strategies as an advisor, scout and agent. He has negotiated several player contracts by volunteering to guide young and upcoming players navigate their careers globally in the U.S.A, Europe, Asia and the Middle East.

Pa earned his Bachelor of Science degree in Accounting from North Carolina Wesleyan College. He is a dedicated husband and father to two children who he hopes to inspire and instill the importance of sports as not just a pastime, but rather a bridge of connection to others – in bonding, community and love.